Fireflies are one of those magical creatures; comprising fairies, sacis and elves that inhabit enchanted forests.  After all, like fairies that fly, sacis that hobble on one leg only, and elves that disappear, fireflies also have special abilities.  They are tiny bugs whose lights flash on and off.  The difference is that no one doubts their existence.  These small beetles are part of the ecosystem and just as important as any other, but are threatened with extinction owed to excess artificial lighting, pollution, and deforestation.
Fireflies use their lights to attract mates and reproduce, as well as to defend themselves against their enemies and to hunt (they feed on ants, termites and moths).  According to specialists the excess artificial lighting at night hinders the animals from using their lighting signals to find each other.  And it also jeopardizes viewing of the skies, making astronomical studies difficult, increases poor visibility and harms animals and plants. This is why, for example that parks and botanical gardens do not have any nighttime illumination.
In Portugal, the Gaia Biological Park opens especially on June evenings to allow the public to observe the fireflies. In Brazil, shows starring these insects occur mainly in the Amazon and the cerrado, in the state of Goiás.  The lightening bugs can be seen there far from the artificial lights. The phenomenon occurs from October to April when the females, after being fertilized, deposit their eggs at the base of the termite hills and at night light up to attract prey.  The fields are ablaze as if by hundreds of small Christmas trees.  Unfortunately, however, these locations are becoming increasingly rare, because soy crops have been allowed to expand without any control.

The threat of deforestation
Pollution, deforestation and excess artificial light threaten the future of the species.  Fireflies, which in past centuries were so numerous that the natives of Central American used them to light their thatched huts are disappearing; such a shame. Colored butterflies, elegant dragonflies, ladybugs and dancing humming birds used to populate our gardens during the day, like in Alice in Wonderland.  At night there were fireflies which covered the dark and silent space like Christmas lights, bringing the starry sky a little closer to us.  But, it seems that the destiny of the firefly will go the way of sacis and fairies, into the dark blue backdrop of the forest, as sung about by Ney Matogrosso.

* In Brazilian folklore, a small one-legged man who pesters wayfarers at night or sets traps for them. 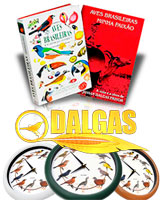